In pursuit of soil perfection

James Price, an innovative farmer from Perdiswell Farm in Oxfordshire (UK), implemented regenerative practices ahead of their current widespread-interest with a special focus on soil quality, water retention capacity, and consistent high yield. Here he reveals how he got there. 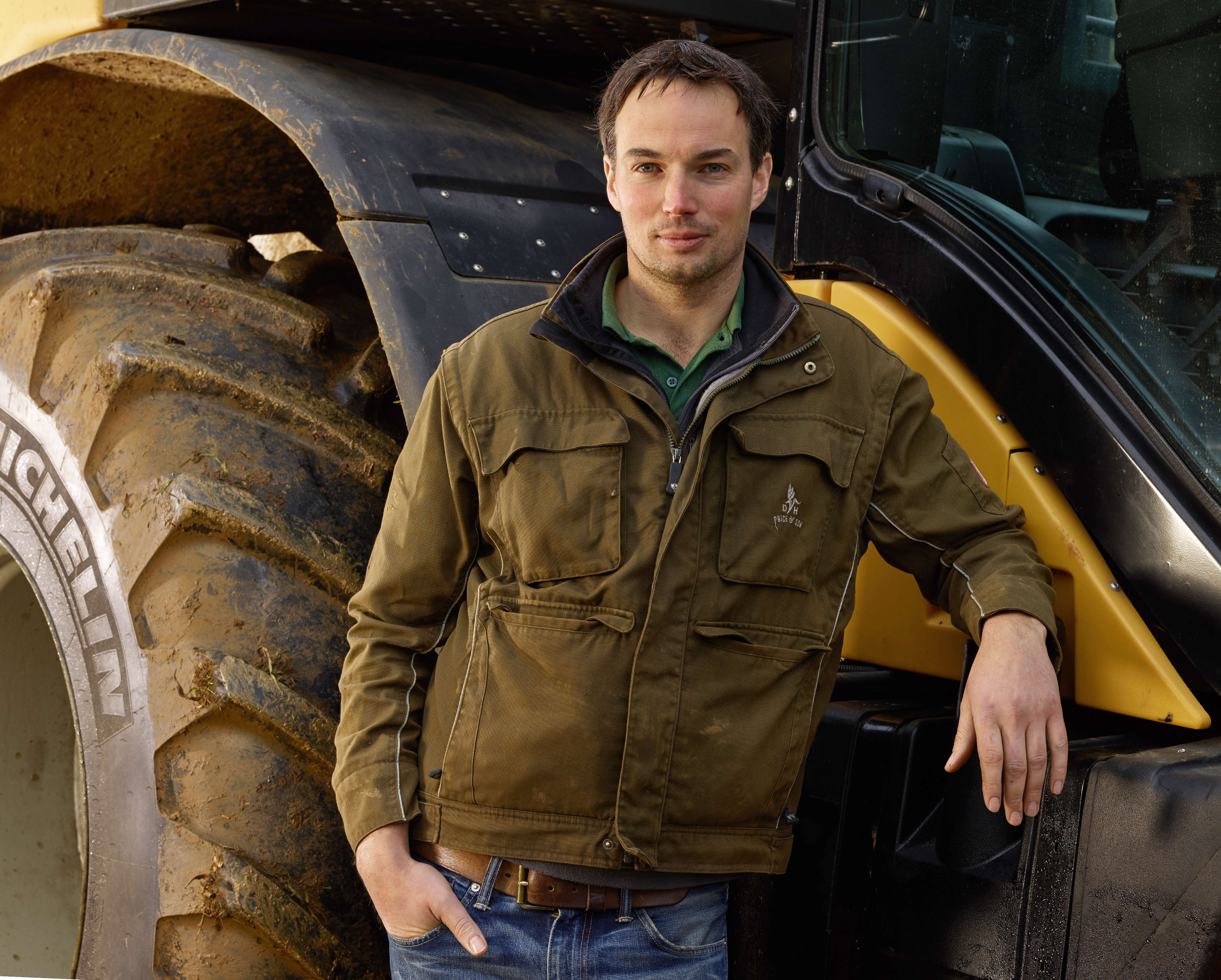 Q1: What are the soil management practices you developed?

We’ve been an all arable farm since 1974. Here, we have a thin soil, what’s called a Cotswold brash, a calculous, limestone soil. It’s a lovely, loamy soil but there are a lot of stones in it. More stones, in fact, than soil. We have 200mm of top soil maximum. It’s generous in some places and then beneath you have a very rocky sub-soil. So, with us there’s a problem with roots getting moisture. The Cotswolds in England has always been a grass area known for sheep grazing. It’s not known for big arable yields for the simple reason that if you have a dry May or June you would suffer badly.

When I came back from university in 1999, one of my drivers was to say actually we need to improve the water holding capacity of the soil. And I did this in lots of different ways. We’ve got a wide five-year rotation with three cereals and two breaks such as beans, rape seed and sometimes oats. We have a mix of winter and spring crops, so we’re not trying to get everything in the winter or spring. The big driver since I’ve been here is putting a huge amount of organic matter back into the earth. So, on 1100 acres of land around our core farm we’d put up to 8000 tons of some form of muck (organic manure) into the soil every year.

We also have a five year mix of cultivations to boost soil health: we plough one year and give two years apiece to direct drill and low till. Like a lot of innovators we learnt about the value of using cover or catch crops by accident. One year we had spare mustard seed and decided to use it up by growing it between the harvest of the winter crop and planting the spring crop. Now, it’s a practice we use frequently. This has helped us get good at it and we have definitely seen great results. For example, we can see how the ground gets less saturated after heavy rainfall.

And from mid-September to mid-March, we also get livestock from other farmers to graze and cover those catch crops off. Now we have cattle sheds here too. So, we have grass in the rotation and we get straw to the cattle and get the muck back.

Q2: What made you decide to shift to these practices?

Going back to when I got back from university 22 years ago, my Dad (who had run the farm since 1974) said you’d do well to get 7.5 tons crop yield per hectare, while now we’re budgeting at 8.5 tons in a consistent way. I always thought this was just good farming practice. It’s going back to how people used to farm but on a bigger scale and with more equipment.

Q3: When did you first start seeing good results?

It took four or five years and we started to suddenly see some pretty good results (see data box). And today with the extreme weather conditions – very hot, cold, wet, dry – we are seeing that we are weathering them out. Even in a poor year we’re doing okay. As mentioned, we’re starting to budget 8.5 ton crop yield per hectare consistently.

We know our soils are working. And it’s striking that when we take new land on, we cannot immediately get the same results. When we try to implement the same techniques we use here, especially by establishing cover crops by broadcasting them into the standing crop, it doesn’t always work so well. It’s because their soils are not working as well as ours are.

Going back to the challenges, in getting the organic manure, I have found you do have to work at developing the relationships over time. You can’t just turn up somewhere and say I’d like some muck please. The relationship with stock farms for cow manure, and with big water companies for clean water sludge or compost, takes time and effort to build. 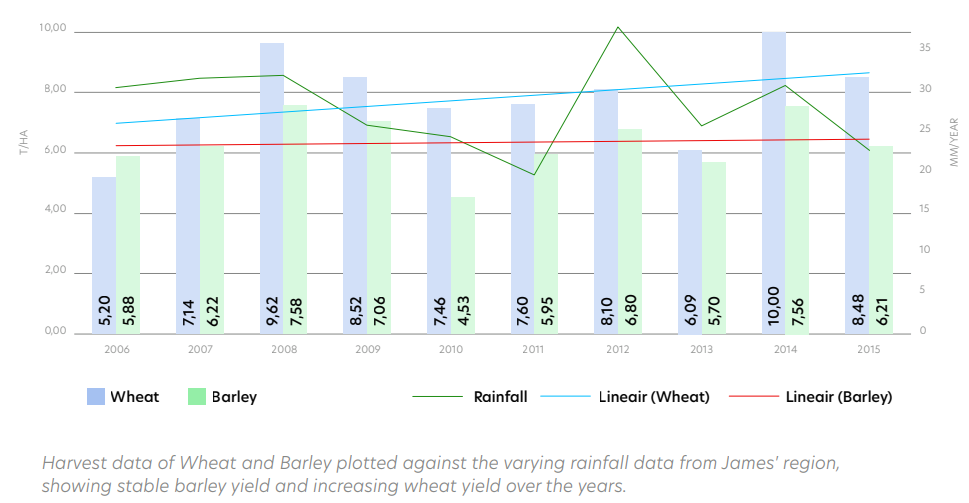 Q4: What are the best starting points for farmers who want to maximise their soil yields?

I’d say to them, start with what you can control such as cover and catch crops and tillage practices. And work on building those relationships I mentioned for the ‘muck’. There are only a finite number of organic manures out there. You do have to work hard to build those relationships to get the types of arrangements we use here such as ‘straw for muck’. And, finally, make sure you do the soil analysis first thing. There’s no point in working on soil that doesn’t need the extra help.

Q5: Is there any financial support out there for farmers doing what you do?

There was nothing specifically for what I was working on when I started out. There are national schemes on the horizon such as the UK’s draft three tier Environmental Land Management (ELM) scheme.

Another point I’d make to farmers new to this is that you cannot get a definitive picture of what is right for your cover crops. There are so many studies and ways of analysing it. It really is something where you just have get a feel for what is right. You can spend £60 a hectare on your cover crops. I’m spending typically probably less than £16. I grow my own seed and broadcast in a cheap and cheerful way to get something in there. The benefit is far more having it there than what is there. Better to put something in rather than nothing.

Q6: What role does precision farming play for you?

In the bigger picture of saving wastage, there is auto-steer which provides a lack of overlap and resulting reduced wastage in terms of wearing-out metal, seed and sprays. A lot of the efficiency boxes are ticked just by steering in a straight line with machines working at the correct width the whole time.

The second application of technology, and a big one for me, is the analysis of what we’re doing. We’ve got very accurate yield data from the combine harvester which we can analyse. We’ve got satellite imagery and we’re also using the Yara N-sensor on the roof of the cab to measure in real time nitrogen levels. And we’ve got a way bridge. All of these are used to monitor the crops or analyse the results of something we’ve done. For example, if we have an in-field trial (like this year with Bayer), you can see from some of the satellite imagery one much greener tramline in the field. It stands out totally clearly. That’s where the tech is helping us a lot – putting a precision analysis into what we’re doing. We’ve got a spreader on our crop sprayer with a seeder unit which will spread the seeds out to 30 metres, used for planting our cover crops.

Q7: How do you measure the fertility of your soil?

So far, we’ve done physical soil sampling. We haven’t done any carbon measuring yet. We’ve done soil organic matter, which we’ve done for a long time and is a good indication of soil health. We were involved in working with testing out a new soil x-ray gun that collects a huge amount of high-resolution data, being developed by a PhD student. You could go to your muck heap, pull the trigger and it would tell you what’s in your muck, apart from nitrogen. Point it at the soil and it tells you what’s in it. As regards carbon, I am waiting for clear guidance on the definitive, recognised way of measuring it. I would be willing to try carbon farming (carbon sequestration for carbon credits) but need to have a much clearer idea of what the standard measure will be and how the business model would work. I need to know: this is the scheme, this is what we’d pay you, this is what you’d need to deliver and this is how we measure it. I do think carbon markets will become an opportunity for farmers, but it needs clearer explanation of how it works.

To find out more about Perdiswell farm click here.